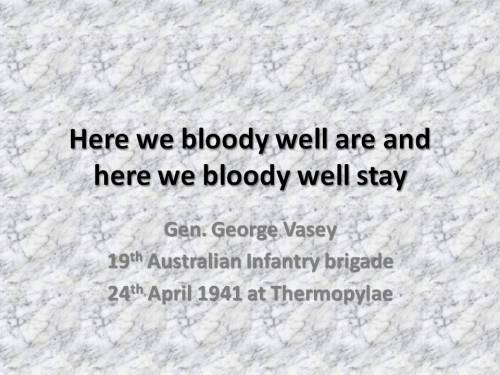 It was on this day in 1941, at Thermopylae which showed beyond any doubt that Leonidas and his handpicked Guard are the ultimate warrior standard…

When the allied Australian and New Zealand forces that had landed in Greece earlier in April, began to retreat, some had to act as rearguard. Passing through Olympus and Servia, the ideal spot to set a cover line for the retreating forces were the straights of Thermopylae. The New Zealanders under General Freyberg were holding the line from the coastal road to the Sperchios river. The Australians’ defensive area was from Sperchios to the village of Brallos. In and around the village itself, the 19th Australian infantry brigade had been placed, comprised of the 4th and 8th Infantry Battalion. Commander of these forces was the Gallipoli veteran, General Mackay. On April the 20th, the Australian forces were reinforced by the 11th Infantry Battalion.

The ANZAC generals are said to have informed their men that they would not retreat from their positions. A good example of the ignorance of the overall strategic planning to leave Greece or, simply, an attempt to enforce maybe laconic discipline?

In any case, Mackey, after the battle had stated to an Australian newspaper correspondent that “I thought we would last for a couple of weeks and that we would simply be pushed back due to sheer weight of numbers”.

And yet, as would be shown many times in subsequent WWII history, the forces that had well prepared defences, received the order to retreat and abandon their positions! An order, almost criminal from a tactical point of view, since there was no one to cover that retreat! Luckily enough, the two generals in command, both distinguished veterans of WWI, executed the order received, but left a brigade in each of the two defence positions. With two brigades covering the retreat of the remaining three, the generals hoped to prevent a tragedy of the ancient Greek proportions.

The 6th New Zealand brigade and the 19th Australian infantry brigade had to hold the passages to southern Greece, for as long as possible, allowing for the safe retreat of the rest of the units to the South.

On the morning of the 24th April and shortly before the outbreak of the expected German attack, general Vasey, commander of the 19th Australian brigade handed out the daily order. Inspired by the historical figure of Leonidas, he said to his men,

The Nazi forces were unaware of the fact that the defensive positions that they had located were already abandoned by most of the men in defence. They fell upon the Allied forces with fury, much like the sea on the ANZAC’s right wing. They fell however upon the wavebreakers! Waves of soldiers, reinforced by armour and Stuka dive bombers fell upon the walls of Australians and New Zealanders. The only outcome was for them to break. The attackers, not the defenders! With fantastic bravery and composure, the warriors from the “island continent” repelled all the German attacks.

During one afternoon Stuka pass, a New Zealand officer stands up shouting above the noise of the battle to the men in his platoon to drop for cover. A soldier hesitates for a moment. A fatal moment. He doesn’t make it. The Stuka riddles the ground and gets him. The lieutenant remains dumbstruck petrified. Rage flows through him. A second Stuka approaches. He hears it. His soldiers shout for him to get to cover. He ignores them. He turns and points the muzzle of his Lee Enfield towards the sky. He aims…

“You won’t get anywhere with that, Lieutenant!” a soldier yells at him from the relative safety of the trenches.

he answers and tossing his rifle, he runs to his dead comrade. He picks up the Bren from the lifeless arms of his soldier and goes two steps forward. Down on one knee and with the machine gun shouldered (!) he fires a long burst on the bomber closing in! The Stuka returns fire. The shots from the aircraft fall frighteningly close and around him, raising dirt and stones and creating a curtain of dust. The Stuka levels out of the dive and leaves. The covered New Zealanders raise their heads to see how badly their lieutenant was hit. With the dust resting, they see their lieutenant without a scratch, having raised his arm, hand in a fist and his middle finger extended towards the leaving bomber! Enthusiastic warriors as they be, the New Zealanders start cheering and counterattacking the infantry forces in front of them! Was it luck? Was it a very well calculated (why he took two steps forward from his fallen comrade) risk? The only thing certain was that in the same way, this particular officer would continue to avoid enemy fire for the upcoming years of the war and would become the most decorated soldier of WWII!

By nightfall, the ANZACs had destroyed 15 German tanks and had erased almost a complete company from the total Wehrmacht forces, with relatively light losses of their own. On the night of the 24th of April, a new order for retreat came in. This time, they had no reason to stay. They abandoned their positions and followed the bitter procession of soldiers trying to reach the ports of Rafina, Porto Rafti, Nafplion and Kalamata (Peiraias could not be used to refuge all those fighters along with their equipment since it constituted a permanent target for  the Luftwaffe and the, by now almost dead, Regia Aeronautica).

The ANZACs followed with respect and ethos the footsteps of king Leonidas and his 300 brave men. Always the correct people to do the heavy lifting no matter which state, they never brought shame to their flags. The same however could not be said for their senior leadership (political and military alike). As Crete would prove about a month later, senior leadership would, on more than one occasion, prove to be very insufficient…

Read the article in Greek.